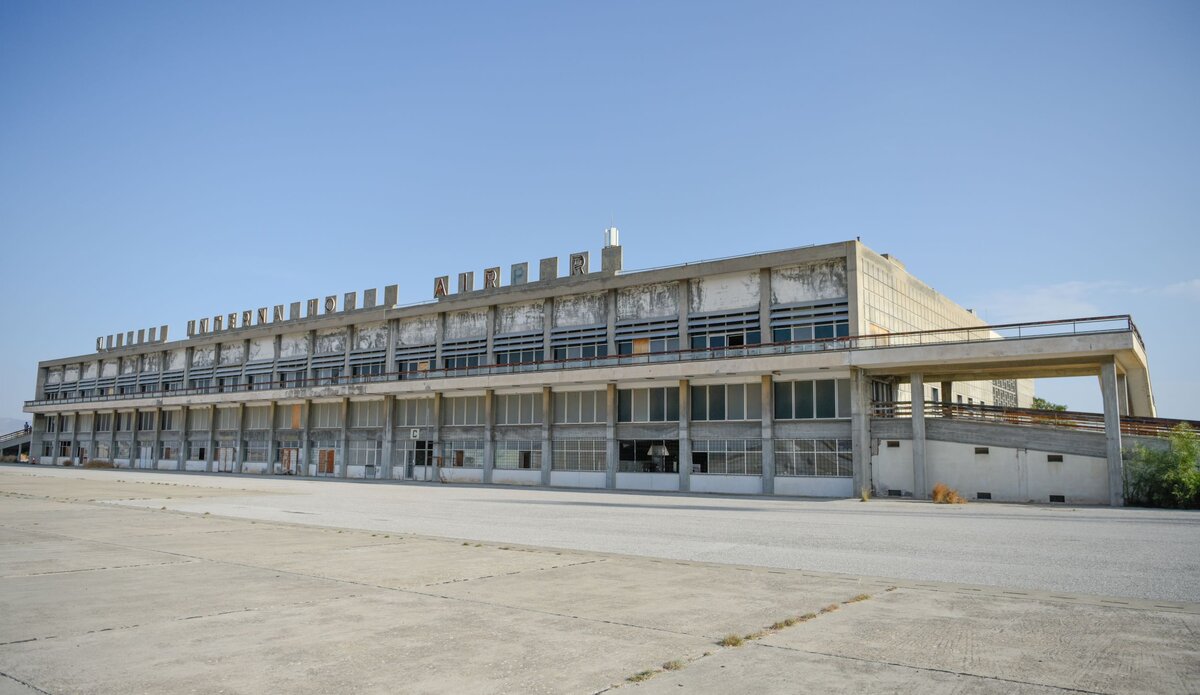 Within the buffer zone on the western edge of Nicosia, the hangars and runways of the Nicosia International Airport remain much as they were on 16 August 1974 – frozen in time

The Airport began service as Royal Air Force Station, Nicosia, and saw heavy use during the Second World War. It opened as a commercial airport two years after the end of the War, in 1947, but the area surrounding the airport itself remained the location for the Air Station. After Cyprus gained independence in 1960, the airport and its surrounding area were transferred to the Cyprus Government. The airport itself, including the tower, was staffed and run by Greek Cypriots, and was the island’s only international airport.

The RAF continued to occupy part of the site, known as the RAF Nicosia Retained Site: this British “retained site” status gave the United Kingdom the right to exercise exclusive control over the designated area in an emergency. In addition, three former RAF camps close to the airport shared facilities with UNFICYP after the Force’s establishment in March 1964.The airport facilities were expanded with a new terminal building in 1968. The runways served both military and civilian aircraft, and by July 1974, Nicosia International Airport was welcoming a strong tourism trade.On 15 July 1974, Greek National Guard officers staged a military coup d’état.  For the next four days, the airport was kept busy with commercial flights arriving to evacuate civilians which were primarily tourists.

On 20 July, Turkish forces, responding to the Greek coup, launched a series of air raids on the airport. On 23 July, fighting between Turkish and Greek forces was especially fierce in the airport vicinity. The Force Commander at that time, General Prem Chand from India, ordered UNFICYP to take over the airport, declaring it a United Nations Protected Area. United Nations Headquarters in New York gave its immediate approval, and, with the agreement of the local military commanders of both sides, UNFICYP troops (from Canada, Finland, Sweden and the United Kingdom) occupied the airport under the following conditions:

The UNPA included the whole of the airport complex, including the premises of RAF Nicosia and the UN camps.

Neither side was to approach within 500 metres of this perimeter. When ceasefire lines were drawn on 16 August 1974, the area declared as a United Nations Protected Area (UNPA) was included within the buffer zone.

In keeping with UNFICYP’s mandate to maintain the status quo, the airport has remained a United Nations Protected Area since 1974.

Time and weather have led to some structural deterioration to the terminal building and to the Cyprus Airways Trident Sunjet passenger plane resting beside it: the plane’s engines were stripped during the crisis in 1974, and used to repair another Cyprus Airways airplane to enable the latter plane to fly out. Extensive efforts were made during 1993 and 1994 to reach an agreement on a series of confidence-building measures aimed at spurring a return to normal conditions on the island.  A key element in the action was an attempt to reopen Nicosia International Airport for the equal benefit of both communities.

By mid-1994, however, agreement on the measures remained beyond reach, and despite further talks between both communities, the airport remains closed.